An eco pet, or Adventures of a House Rabbit. 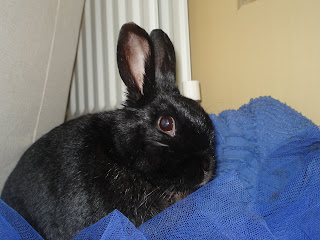 We’ve had a visitor for a week or so whilst some friends have been on holiday. His name is Peter and of course, he was of the furry, non human kind. A house rabbit was a new one on me. I’d always associated rabbits with pokey smelly hutches outside, with snappy cowering stroppy rabbits. All my preconceptions about rabbits turned out to be wrong (with the possible exception of stroppy).
Peter did not dissapoint. Less needy than a dog, more engaging than a cat, he skulked beneath our furniture for quite a few days (see above) before making the move onto it (see below). 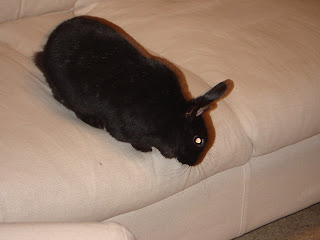 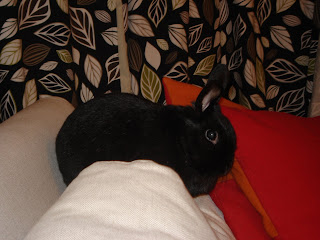 As a pet he also has another major advantage: he didn’t smell. His food didn’t smell (anyone who has even opened a tin of cat food knows why I say that) and his poo didn’t smell (ditto above). And he’s a vegetarian.
As you may imagine, we’re distinctly temped by having a house rabbit. I know that pets are generally not considered sustainable, but as pets go, a rabbit when critiqued against a cat makes good sense:

Really, I’m begining to wonder why we don’t have a rabbit already….